This is a work of history in which startling acts of resurrection take place: Poor young African-American women in Philadelphia and New York City in the late 19th and early 20th centuries engaged in the most ordinary of activities — walking down the street looking in shop windows, hanging out with friends on the street or hallways, going to clubs and music halls, striving to be singers or dancers — emerge to become extraordinary vivid living exemplars and experimenters of 20th century life. 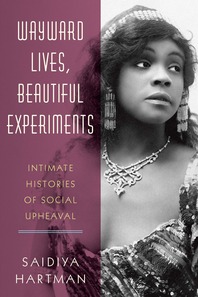 Wayward Lives, Beautiful Experiments: Intimate Histories of Social Upheaval (W. W. Norton, 2019) is a social history unlike any other. Columbia University Professor Saidiya Hartman digs deep into various archival material but goes far beyond the presentation of mere facts and outlines. She dares to extrapolate, fill in the cracks from close readings of other documents, color in the sketches, and inhabit the heads of her subjects with a stated goal to “illuminate the radical imagination and everyday anarchy of ordinary colored girls, which has not only been overlooked, but is nearly unimaginable.” (page xiv)

Such a risky approach seems like it would be more literature than history — and certainly Wayward Lives, Beautiful Experiments overflows with beautifully crafted prose — but if the purpose of history is to familiarize us with the past without deception, then I feel this book qualifies in a way that thrills and enlightens. The 64 pages of footnotes are a treasure trove of literature, history, and sociology, and I loved the period black-and-white photographs that mesh thematically with the prose.

Just a generation after the end of slavery, dangers lurked for young black women. Early on we are introduced to a prepubescent girl posed like an odalisque for the creepy camera of Thomas Eakins, but older women were threatened as well. The demographics required that black women work, but the only jobs available to them (even in the supposedly progressive cities of Philadelphia and New York) consisted of domestic work of cleaning and laundry.

Yet, these girls had aspirations for greater lives, and if not freedom in their working lives, then rebellious freedom in their social lives. “Owning nothing and subsisting on so little, they let the heart decide everything. Love was their only anchor.” (page 147) For black women, there were men, of course, but many of the most interesting stories in Wayward Lives, Beautiful Experiments involve women who explored the alternatives. Within its pages we meet the lesbian and cross-dressing Jackie Mabley and Gladys Bentley, and in one of my favorite parts of the book, we follow the early education and growth of Mabel Hampton, who became a prominent lesbian activist and archivist, and who lived until 1989.

There were laws designed to protect wayward girls, and particularly wayward colored girls, but these laws served more as forms of repression rather than protection. Girls could be arrested for vagrancy, or for prostitution, or even for being incorrigible. The Tenement House Act was supposed to protect poor people from bad living conditions, but it also criminalized vagrancy. “Once police entered a flat, everybody they encountered was subject to arrest. Billie Holiday was arrested in one such sweep, where more than a dozen women were arrested in a five-block radius.” (page 252)

Minors didn’t come under the purview of the laws that applied to adults, so they did not have due process and could be sent to the correctional facility at Bedford Hills for an “indeterminate” sentence. Bedford Hills still exists as a maximum security prison for women, but a hundred years ago it was the site of brutality and torture, where after a two or three year sentence “the black women were sent to white homes in upstate New York and forced to labor as live-in domestics.” (page 266) Another wonderful passage in Wayward Lives, Beautiful Experiments describes a riot at Bedford Hills during which the prisoners made as much noise as possible.

There are several famous and semi-famous historical figures that make an appearance in Wayward Lives, Beautiful Experiments, but the real power of this book is its elevation of the virtually anonymous to become heroes and explorers of new ways of living.