What is it about gun advocates and math? Are the deceptions deliberate? Or does the excitement of grasping a sleek stiff tool in one’s hand cause a depletion of cognitive coherence?

In the past, I’ve explored the bogus mathematics of people who claim Norway has a worse mass shooting problem than the U.S. and the idea that America’s gun problem is confined to four cities (and if you’re familiar with the President’s racist tropes, you can probably guess which ones).

Just recently I saw somebody claim that you’re more likely to be killed by a meteor than murdered by a rifle!

Sheer common sense refutes this. We’re all familiar with recent mass shootings in which the weapon has definitely been a rifle, yet incidences of people getting clobbered by meteors are vanishingly rare.

But here’s the argument: According to FBI crime statistics there are only a few hundred murders by rifle in the U.S. every year. (Handgun murders are much more common.) Divide that by the approximate population of the U.S. (about 330 million) and you get an approximate chance of 1 in a million of being murdered by a rifle. Yet, according to Death by Meteorite, an entry in Phil Plait's Bad Astronomy blog on the Discover magazine web site, “any person’s lifetime odds of being killed by an asteroid impact are about 1 in 700,000.” A chance of 1 in 700,000 is more likely than 1 in 1,000,000. QED.

Something seems wrong, and it is. The first problem is that the rifle murders are annual rates, while the meteor killings are “lifetime odds.” Apples and oranges.

Are you curious where that figure of 1 in 700,000 comes from? Me too. The Death by Meteorite blog entry attributes the number to “Astronomer Alan Harris.” I found his CV on the Space Science Institute site, and way down at the bottom is a citation for the article “Chicken Little was right! The risk from an asteroid or comet impact” published in Phi Kappa Phi Forum, Volume 86, Number 1, the Winter/Spring 2006 issue.

I’m afraid I can’t give you a link to that article, but as a proud owner of a New York Public Library card, I was able to access it through the system that was once cleverly called CATNYP. Perhaps your local library is just as useful.

The gist of Harris’s article is that even though large asteroids and comets don't strike the earth very often, the fatalities are likely to be enormous. The big example is whatever hit the Yucatán Peninsula 65 million years ago and likely led to the Cretaceous–Paleogene extinction event. Smaller impacts might cause fewer fatalities, but these would be more frequent. Harris calculates these likelihoods, and summarizes the results in this table: 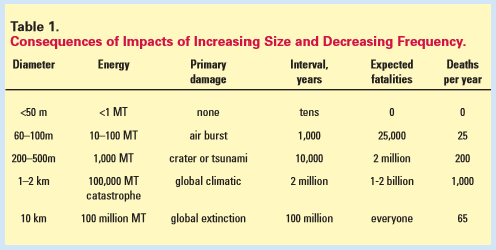 The second column is the energy of the impact in megatons. The final column is simply the Expected Fatalities column divided by the Interval column.

The curious entry is the second row. These impacts are expected to occur every thousand years with average fatalities of 25,000, yet recorded history seems absent of any deathly event of this magnitude. Harris comments “in fact only a small fraction of events kill even a single individual because most occur over the ocean. Those that do occur over land are mostly in remote areas,” such as the 1908 impact in the Tunguska region of Siberia. We don’t know of any fatalities from events of this size because “only one in about five events (once in five-thousand years) kills anyone.” I’m not sure why Harris didn’t adjust his numbers to reflect that.

The big meteor crater in Arizona is an example of the impacts represented by the third row. If such an impact occured over the ocean, it would generate a tsunami that would also result in major loss of life. The final row encompasses the Yucatán impact.

If you sum up the final column, you’ll find 1,290 deaths per year worldwide from asteroid or comet impacts. Harris apparently uses year 2000 figures of a world population of 6.07 billion and a U.S. population of 280 million to convert that figure to 60 annual deaths in the U.S. That number appears in the article’s Table 2 showing “Risks of Various Causes of Premature Deaths in the U.S.” for the entry “Asteroid impact (all sizes),” where it is contrasted with such entries as annual auto deaths of 42,000, airplane crashes of 125, and terrorism (excluding 9/11) of 3.5 deaths per year.

This analysis is still flawed. Yes, it is likely that sometime in the next hundred million years or so, the earth will be struck by a meteor that will cause a major extinction event. But will humans still exist to witness that? And will they still be shooting each other with rifles?

To get a better idea of the relative likelihood of being killed by a meteor vs. murdered by a rifle, we need to look at the lifespan of a single individual. What is the probability of that “global extinction” event happening in an individual’s lifetime? It is 80 years divided by 100,000,000 years, or 0.0000008. That “Deaths per year” column in Harris’s Table 1 needs to be adjusted by factors such as these to convert the deaths to a single human lifetime.

The final three columns of Harris’s Table 1 are shown here, with a fourth column of a lifetime adjustment factor of 80 years divided by the first column, and then the fifth column is that adjustment multiplied by the annual deaths:

The total worldwide deaths of meteor or asteroid impacts during a single human lifespan is the sum of that last column or 3.64. The U.S. fraction of that is 0.168 deaths, or lifetime odds of about 1 in a 20 million.

At this point the numbers are ridiculous, but just so there's no doubt, you're well over a thousand times more likely to be murdered by a rifle.